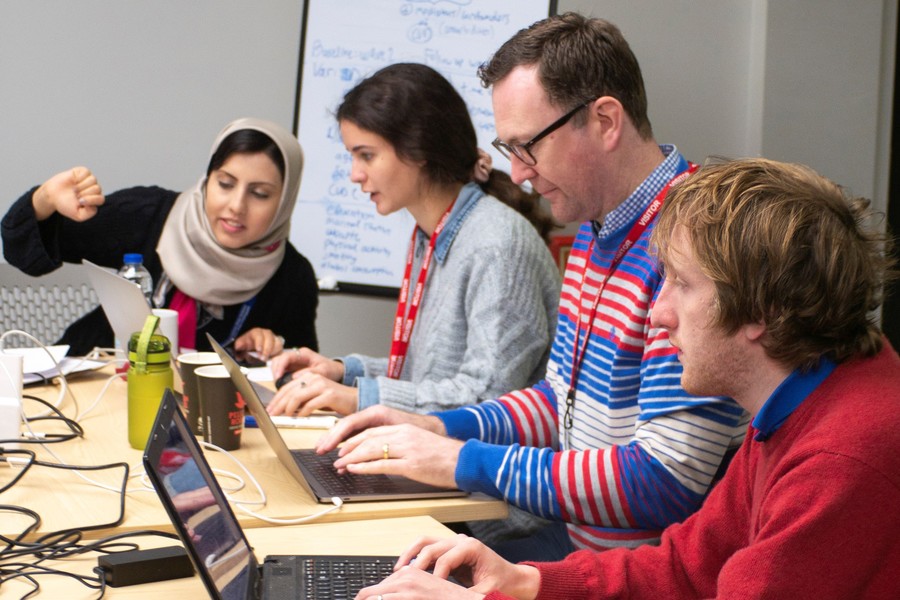 More than 25 data scientists, statisticians, researchers and students collaborated in a 3 day ‘hackathon style’ event which was held last week, at Swansea University.  The event – a ‘DPUK datathon’ – challenged teams to explore data sets held in the DPUK Data Portal to identify early indicators of Dementia.

Dementia set to triple by 2050

With dementia set to triple by 2050, scientists are looking for ways to accelerate and innovate dementia research so that the disease can be diagnosed much earlier and prevented from progressing. Datathons provide a collaborative and secure space where dementia researchers and data scientists can work to answer some of the most pressing research questions on dementia.

The Dementias Platform UK (DPUK) datathon in Swansea saw participants from a whole range of different backgrounds come together to innovate on one of the most intractable problems for dementia researchers today – namely how to identify the earliest signs of the disease.

Teams used machine learning techniques and other traditional statistical methods to uncover hidden patterns in cohort data that might identify those at risk of developing dementia, or indicate promising areas for research into treatments.

Despite decades of research since the discovery of the Alzheimer’s in 1900 there have been no significant advances in treatment for the disease. Many of those living with dementia find that completely fresh approaches to research is what offers them hope – the innovative approach at the Swansea datathon is what’s particularly exciting.

To fuel ideas, the teams at the DPUK datathon heard from Nigel Hullah.  Nigel is already a well-known activist for the rights of those, like him, who live with dementia. As Chair of the 3 Nations Working Group for Dementia, he advises at a high strategic level to the Welsh government. However, being on the ground with dementia researchers is new for him. At the Swansea event, the researchers tackled an issue that Nigel sees as the start of improving lives of people with dementia: diagnosis.

Nigel, said: “We need a consistent research-based approach to improving the lives of people who are living with dementia, and early diagnosis and intervention is where it starts. If we diagnose earlier, if we understand the most effective therapies earlier then we get more people on the right path so they can live better for longer.

Research is the hand of hope. I want to see new approaches new techniques like this because I know personally, and through all my work since my own diagnosis – there is no time to lose. We need to see creativity and innovation in the research, to improve the diagnostic rates and understanding of the best treatments.”

John Gallacher, Director of Dementias Platform UK, commented at the event: “DPUK datathons are a fresh way of tackling one of the biggest challenges for dementia treatment today – spotting it’s hard to see early signs. Here in Swansea, data scientists are bringing a whole range of diverse skills to the challenge. They’re working in the DPUK Data Portal with some of the most valuable datasets we have available. The innovative approaches these data scientists bring are just the sort of fresh thinking we need in dementia research today.”

Chris Orton, DPUK Data Project Manager, added: “The datathon was a great success; with over 16 hours of exploration and analysis across three days, the event concluded with the 4 teams sharing their final presentations.  The teams had access to a wealth of data, including imaging and genetic data derived from thousands of participants, and using their wide range of skills they were able to answer initial questions surrounding multi-comorbidities of dementia.

This series of datathons has enabled research and analyses at a scale that has not previously been possible for studies into dementia, particularly when in an environment with so many researchers actively working together. We hope that by continuing our datathon series, we will attract a large network of researchers to continue to explore ways to understand and tackle dementia, and therefore foster continued development of scientific methods and outputs in this area.”